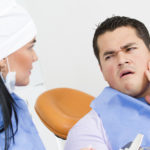 You’ve all heard the saying … root canals are about as popular as The Chicago Bears in Green Bay, WI. Over the years, people have dreaded hearing those words from their dentist “you are going to need a root canal.”

But with new technology and methods, root canals are really getting a bum rap in modern dentistry. Where they used to be extremely long and painful, the procedure has evolved to where, today, it is really faster and no more painful than getting most cavities filled. The relief you will feel on the distressed tooth will be immediate and complete.

The root canal procedure refers to a treatment to repair and save a badly damaged or infected tooth. The tainted pulp is removed, the canal is cleansed and disinfected and a filling is placed to secure the tooth.

Root canals can be performed on teeth that are cracked, have a deep cavity, have suffered from repeated treatment or have suffered some form of trauma.

The steps leading up to the actual procedure include a series of x-rays. Anesthesia is administered. When the tooth is completely numb, the pulpectomy is performed, during which an opening is made and the diseased pulp is extracted from the tooth using special files, which shape the canal for proper filling. The tooth is then irrigated to remove debris and clean the canal.

Finally, the tooth is filled with a substance known as gutta-percha and sealed with cement. A crown will ultimately be placed over the previously-infected tooth.

A properly administered root canal can last a lifetime if the patient continues good oral hygiene, makes regular dental visits and avoids chewing hard food on the affected tooth. Millions of teeth are saved every year because of root canal treatments.

Root canal treatments can normally be completed in one visit, sometimes two.

Contrary to myth, root canals do not cause illness. That theory was based on century-old research from a time when medicine did not understand the causes of many diseases.  Modern root canals are actually less traumatic than tooth extractions. There is less incidence of bacteria entering the bloodstream than from extractions. As recently as 2013 research published in the Journal of American Medicine found that patients with multiple root canals actually had a 45 percent reduced risk of cancer.

Furthermore, treatment or restoration of natural teeth is preferable and less expensive than implants or bridges.

If you think you need a root canal, ask your dentist what they would do if it was their tooth? Inquire about the likelihood of success. Dr. Fulmer is highly trained in endodontic procedures and his experience doing root canals assures you of a quality patient experience. To discuss the possibility of a root canal for your teeth, call Dr. Fulmer’s Kenosha office at 262-671-4724 or Paddock Lake at 262-843-4643.